Enter your City name or Pincode

Located in the largest district of Uttarakhand, Badrinath is one of the sacred destinations of the country. It forms a part of both Char Dham and Chota Char Dham pilgrimage and an important religious place for both the Hindu as well as Vaishnav clans. Badrinath Temple, dedicated to Lord Vishnu, has huge mythological importance too.

Though Badrinath is one of the prominent tourist places, with some of the best attractions apart from Badrinath temple, there are some of the best getaway destinations near Badrinath which are not far from the town, yet are equally beautiful and prominent sightseeing spots. Some of these spots are briefed below for reference. 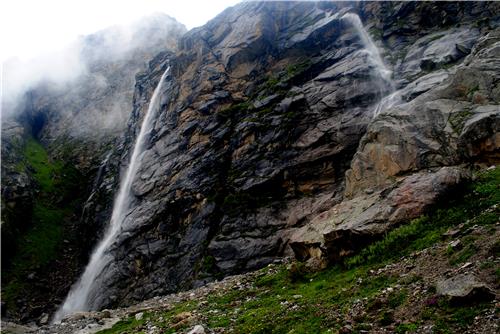 Satopanth
An extremely religious place with huge mythological significance, Satopanth is visited by those who are capable of adventurous journeys. The trek to the place is not too tough but not easy either. People have to sleep in tents or in caves on the way to the destination since there are no villages or houses on the road. The track has beautiful scenic view which refreshes the mind. It is believed that from this point Bheem was not allowed to go further on the way to heaven. The road leads to Swargarohini peak which was taken by Yudisthir only, as per the writings of Mahabharat.

Pundukeshwar
Pundukeshwar is a place referred in Hindu mythology. According to the scriptures, this place was established by King Pandu, who was the father of the Pandavas as per the legendary book, Mahabharat. This place is based at a distance of 4kms from Govind Ghat and around 24kms from Badrinath town. The place is popular all the more as two legendary temples are established here, one of Lord Badri Narayan and other of Lord Basudeva. In the winter months the temple of Lord Basudeva becomes the home for Lord Badrinarayan, and all rituals and customs are performed at the same temple only. However, both establishments were constructed more than centuries ago.

Joshimath
Joshinath is another beautiful location near Badrinath and a must visit for its religious significance. Among the four maths created by Adi Sankaracharya, Joshimath is one which has massive popularity among the devotees. It is said that Joshimath is the place where Lord Badrinath spent the winters. The most popular way of travelling to Joshimath is by the Asia’s highest cable car at an elevation of 1890mts starting from Auli. The distance of Joshimath from Badrinath temple is around 46kms. The two most popular temples in Joshimath are Narsingha temple and Kalpavriksha temple.

Auli
Based at a height of 3050 meters from the sea level, Auli is one of the preferred spot of tourism for the adventure lovers as this place provides an ideal location for sports like paragliding, skiing, etc. In the whole state there is no other place which can match the ambience of Auli. It is also a perfect spot for those who love natural panorama; Auli provides a mesmerizing and alluring scenic extravaganza of the snow-laden Himalayas and the exceptional peaks including Kamet, Nanda Devi, Dunagiri and Mana Parvat. Based at a distance of 60 kms from Badrinath, this place is worthy for a visit.

Valley of Flowers
Stretching for an area of 87.50 sqkms, the Valley of Flowers is a beautiful national park in the western Himalayas. The most attracting feature of this place is that during the summer season the huge pastures remain filled with exotic flowers and enthralling aroma of the same. It forms picturesque scene with magnetizing effect. However, in the winter season the place remains covered with sheets and sheets of white snow conveying a different beauty altogether and showing no traces of the flora and fauna. The road to Valley of Flowers can be covered by a 16km trekking done from Govind ghat. This place was announced as a national park in the year 1982 and at present it is listed under the best world heritage sites.

Hemkund Sahib
Hemkund Sahib is one of the most sacred places with huge religious sentiment attached to it. It is believed that the last Sikh Guru or the Tenth Guru of the Sikhs, Guru Govind Singhji, preferred to do meditation in this place. As per the literal meaning Hemkund means a “lake of snow” and surprisingly the water of the lake is also extremely cold all throughout the year. The site is located at an elevation of 4329mts and in a location which is surrounded by snow-capped mountains and the area is named as Hemkund Parvat. Here there is only a gurdwara in the shape of a star which is considered as the holiest place with thousands of devotees visiting the place every year. In the temple there is another small temple with idols of both Lord Rama and Lord Krishna. The way to Hemkund Sahib can be trekked from Govind ghat and through Ghangharia for a stretch of 19kms. For the Sikh clan, this is one of the most religious place in the country.

Adi Badari
Based at a distance of 17km from Karnaprayag, this temple at Adi Badari is dedicated to Lord Narayan. The shape of the temple is like a pyramid but in an elevated platform and the idol is made of black stone.

Devaprayag
At a distance of 220 kms from Badrinath lies the wonderful weekend destination, Devaprayag. Situated at the confluence of Alaknanda and Bhagirathi rivers, the city has immense attractions. It has rock inscriptions which has huge historical significance. From the religious point of view, it has the temples of Lord Shiva and Lord Raghunath which are also quite famous and visited by thousands of pilgrims each year.

Karnaprayag
Covering a distance of 127km, one can reach the beautiful and religious tourist spot Karnaprayag. This place is based at the meeting point of Pindar and Alaknanda Rivers. The place has temples of Goddess Uma and Karna which are worth a visit.

Nandaprayag
Travelling a distance of 104kms from Badrinath comes the pious destination Nandaprayag. Here the scenic beauty is excellent with the cascading River Alakananda in its peaceful form. Gopalji temple based here attracts huge devotees every year.

Rudraprayag
Based at a distance of 158 kms from Badrinath, this is another excellent excursion which has both religious and mythological importance. Here one can witness the confluence of River Mandakini with River Alaknanda. Excellent temples of Rudranath and Chamunda devi is present here.

It may be concluded that there are excellent locations available for excursions from Badrinath. The essence of all these places majorly is scenic beauty and religious sentiments. However, every place has its distinctive features and it’s always worth a visit. For the travelers it is advisable to carry light woolen clothes for better comfort.

Explore more about Tourism in Badrinath

Are you a Business Owner?

Add the products or services you offer